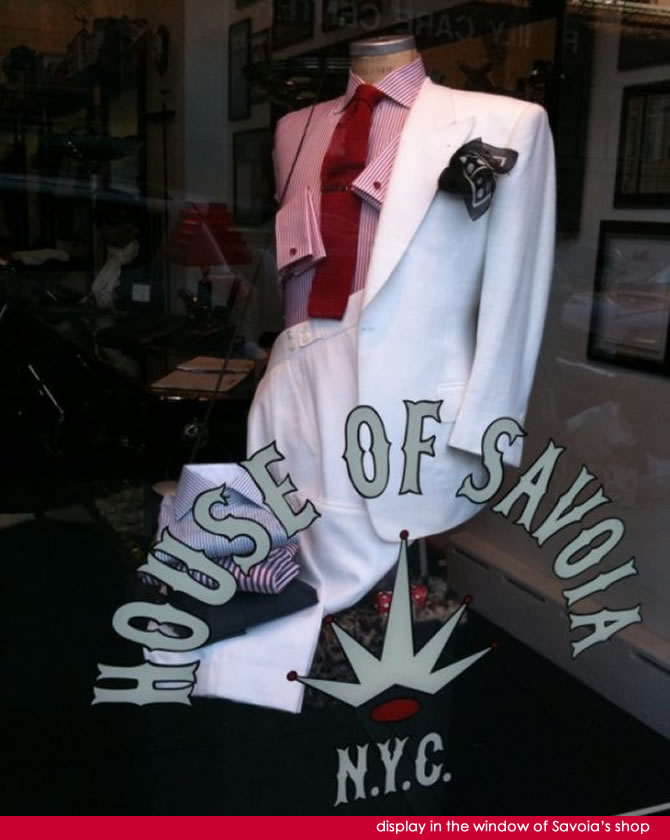 Many moons ago, Michele Savoia had a shop on 7th street and Avenue A when I lived in the East Village. I would walk or ride my bike by and see these gorgeous 1940’s suits and accessories in the window display and on queue I would start humming “Zoot Suit Riot” in my head. Sometimes if you were lucky, you would see mint condition vintage cars parked outside and some of the most impeccably dressed men milling about like proud peacocks. The scene would stop you in your tracks.

At the time, I was working in nightlife, and was on the production team for a very special event that had a circus theme. I needed something FIERCE to wear. I wanted to be the Ringleader because that costume was slick with the top hat and tails, and I wanted to do it my way. After days of thinking, I decided vital components would include the classic dress shirt and tie. I wanted the look tailored to perfection with a hint of flare. I wanted something from the House of Savoia.

Walking into the store was fairly intimidating but Savoia, as I called him, was extremely friendly and open right from the jump. Mind you, I did not know much about formal menswear outside of accessories at the time. That day I got an intense lesson from this talented tailor. He showed me a wide array of fabrics, and we settled on this gorgeous purple, gently speckled fine cotton. We decided upon a high, narrow spread collar with full sleeves and french cuffs. For a tie, I was thinking bow tie and he said he could make a traditional tie that matched the shirt. Tone on tone. Fantastic! Later on, he taught me how to tie the perfect knot and when he did not have a tie clip and cufflinks in his collection that we were both happy with, he hunted additional options down for me. At the final fitting, we settled on a set that was gold toned that had iridescent gems with purple highlights. In the end, the full look was nothing short of phenomenal.

Meanwhile, on the journey from point A to point B, Savoia was easy to talk to, gracious, more than happy to share his extensive knowledge (I was beyond excited and had tons of questions!) and full of stories to tell. Being with him was never a dull moment.

If you’ve ever had attire tailored for you, you know there is nothing like the feeling of wearing something made to fit you perfectly. What he made for me was incredible, the night of the event was most memorable and his input played a solid part in it.

After we worked on that project together, I stopped by the store to chat a few times. But, you know how it goes. The world keeps turning… I got a new job that changed my schedule and later I moved. The next time I was in the neighborhood, I walked by his shop to find it was closed. Last I heard he had opened a shop on Essex and I meant to stop by but never got the chance.

I am saddened by his passing and happy to have had the chance to create with him.

Savoia, you were one of the coolest cats I’ve ever known. I hope it’s the 1940’s wherever you are. 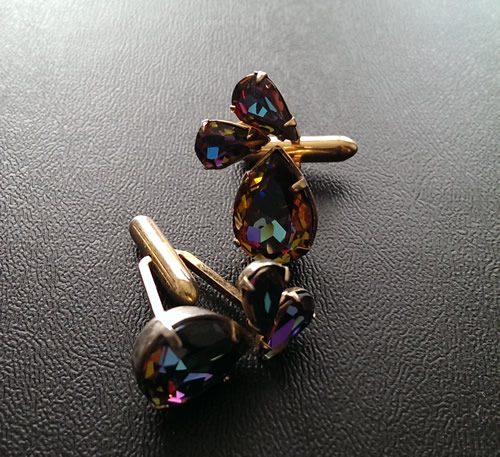 AllegraNoir.com is dedicated to musings on Needlework, Fiber Art, Textile and Design by Cinnamon.